How Long Does It REALLY Take To Learn Chinese?

The short of it is that there are many, many variables that go into how long it’ll take for you to learn Chinese. However, to become fluent, experts estimate that it’ll take 2,200 class hours. If you put the rest of your life on hold and focused only on studying Chinese – at 5 hours of practice a day, it would take you 88 weeks.

When it comes to Chinese, you have two options - Mandarin or Cantonese. They are distinct languages, but use the exact same writing system (aside from a few minor cultural differences), and will take around the same amount of time to learn. Mandarin is more widely spoken than Cantonese, so we'll be using it in our example.

Let’s say you want to speak enough Mandarin to seal your next business deal in Taiwan, to talk to your grandmother in her native Chinese language – or even just prove to yourself you can do it. It’s a good idea; Mandarin is the most commonly-used language in the world. At every instant 1 out of every 7 people on the planet are using it to communicate.

So let’s cut to chase. How long will it take to learn enough Chinese to cover the bases for, say, a networking event? And then how long does it take to become fully fluent in Chinese?

Of course there are many variables to get out of the way first. Determining how long it will take to master a foreign language depends on several factors. Learning a new language requires mastering fresh grammar and different sentence structures, and understanding different cultural meanings and accents. Also some people are just wired better (or worse) when it comes to picking up new languages.

Now let’s get to the facts. According to the U.S. Department of State, there are five levels of language proficiency. Elementary Proficiency, the first level, means the ability to satisfy routine travel needs and the savvy to read most personal and place names, street signs, shop designations, and numbers. This level of proficiency would satisfy basic travel needs to China and Taiwan.

For business folks, the third level — Minimum Professional Proficiency — means you’re able to speak the language with sufficient structural accuracy and a decent vocabulary. Plus, you are able to read standard newspaper items, routine correspondence and reports. With Full Professional Proficiency (the fourth level) you’re able to speak and read fluently and accurately on all levels pertinent to the needs of your job.

The top, fifth level is Native or Bilingual Proficiency, means you’re speaking and reading at a level equal to an educated native speaker. 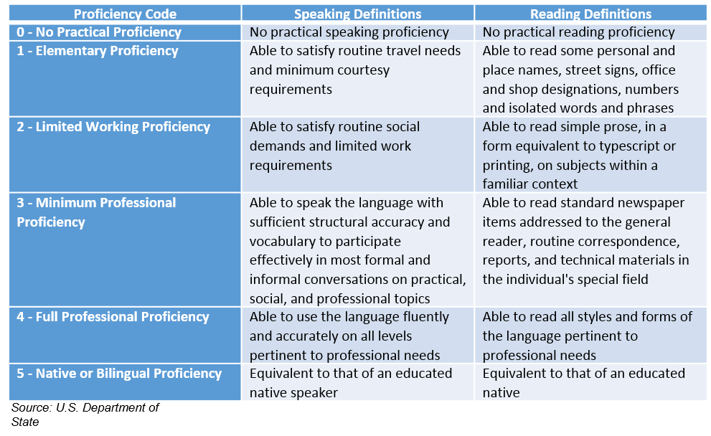 But the more the foreign language differs from English, the more time it will take to learn. Mandarin fits the profile, including an entirely new sets of sounds and symbols. The U.S. Department of State gives as a guide that Spanish and French will require 600 class hours; German takes 750 class hours: and the languages which are far different from English – specifically Mandarin Chinese, Arabic, Cantonese, Japanese and Korean – will take 2,200 class hours.

While the ideal way to learn a language is the immersion approach in which you live and work in the country where that language is dominant, that’s costly and difficult to nail down. Another option is an intensive class. If you consider that the typical language class is 3-5 hours a week, that’s between 108 to 180 hours a year plus the time outside of class to prepare for class. But clearly the math doesn’t look so promising here, either. Fluency requires your commitment to years of course study or you need to supplement your classroom learning with other approaches. There are also tapes, books and MOOCs, but there’s no native speaking instructor to monitor your progress and help with pronunciations.

So it does seem the most efficient way to learn Chinese is in a live, online classroom. Online learning gives you a fully interactive learning environment combining the learning quality of a classroom education with the individual flexibility you come to expect as it pertains to your schedule.

Clearly the key is to start as early as possible and to select an approach to learning Mandarin that matches your availability and learning style. Proficiency can take years, but it will be worth it when you can enjoy speaking the Mandarin language.

Want to Learn Chinese? Join uS to learn moRe!