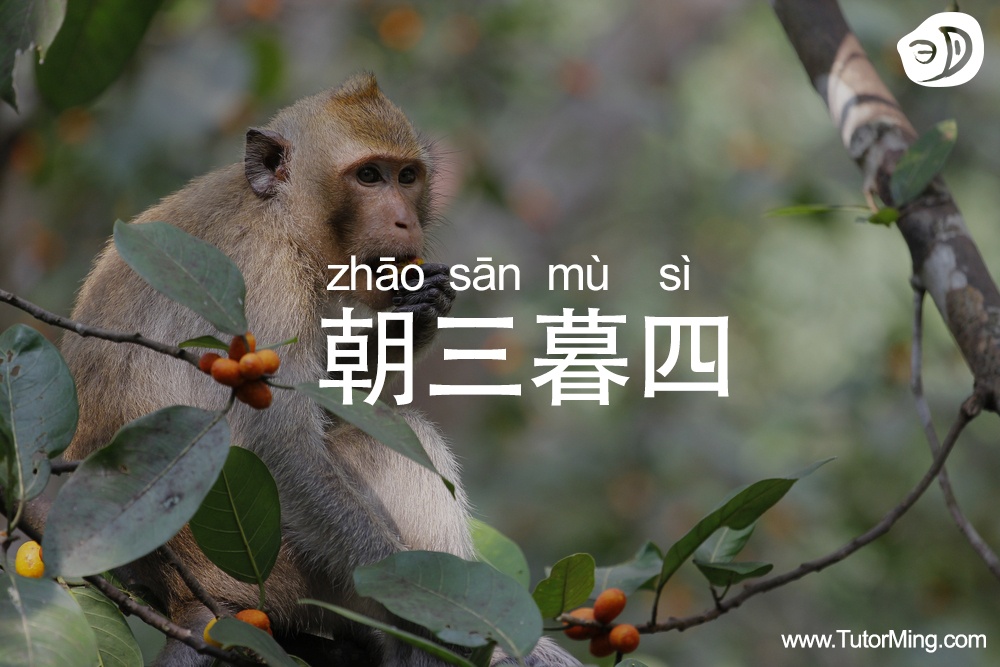 Entire Translation: “To say three in the morning and four in the evening.” Individuals use this idiom to describe indecisiveness, fickleness, and instability.

During the Warring States period, there lived a man who loved taking care of his monkeys (as pets). He felt incredibly thankful to have such animals understand his intentions so well, so much so that he would take from food reserves meant for his family in order to keep his monkeys healthy, fat and happy.

However, this man’s family eventually began to lose money, meaning that the amount of food this man had to give to his monkeys began to decrease. One night, this man decided that he would discuss this matter with the monkeys, proposing that he give them three chestnuts in the morning and four chestnuts at night. Upon hearing that the amount of food they could eat in a day would decrease, the monkeys began to grit their teeth and growl in anger.

How This Story Applies To The Idiom

HOW TO USE “朝三暮四” IN A SENTENCE

1. 如果我是你，我不会信他的话，因为他那朝三暮四的性情很浪费时间。
If I were you, I would not trust her because her indecisiveness has wasted a lot of my time
2. 在上司的面前，不要显得很朝三暮四，这样对你前程不好。
Don’t act indecisive in front of your boss because acting in such a manner will affect your career..
3. 在我童年的记忆里，爸爸跟说过要防着对女人朝三暮四的男人。
As a child, my father told me to be cautious of men who play around with multiple women.