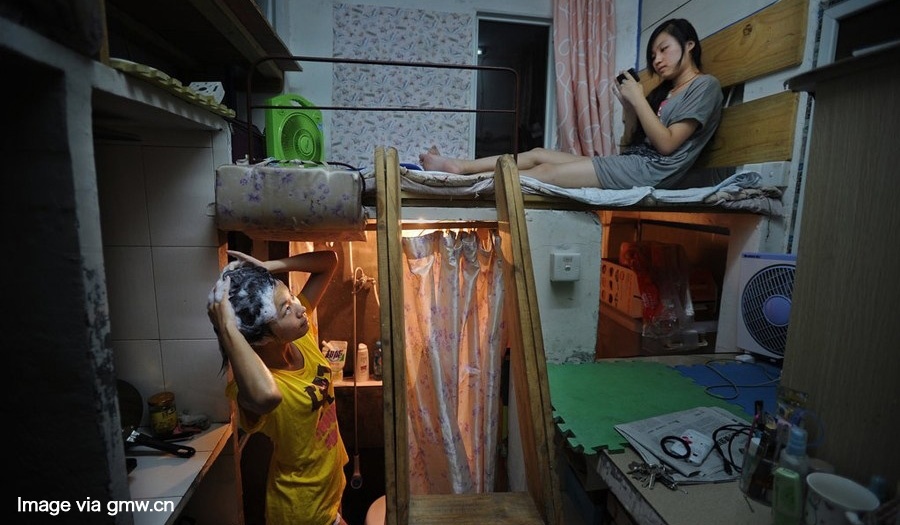 On the outskirts of first-tier and second-tier Chinese cities alike, the ant-tribe (蚁族 yǐ zú) live in cramped quarters and dingy basements, often sleeping 4-8 to a room. The ant-tribe Chinese cultural phenomenon has picked up much international attention in recent years, (even more so than the "Guy-Tai" wave), leading many to ask the question: "What is the ant-tribe?"

Well, the ant-tribe is less of a "what" and more of a "who." As millions of newly-minted college graduates in China begin to enter the job market, many of them forgo the option of returning home, instead choosing to stay in big cities, hoping to find jobs in the field they studied. The reality is, many “ants” are originally from small towns or rural regions, and lack both the social capital（关系 guān xì) and financial capital to help them compete in a big city’s job market.

As a result of the high cost-of-living in cities such as Beijing or Shanghai, these “ants” have to cut back on their rent expenses in order to keep pursuing their dreams. Sociologist Lian Si, then a post-doctoral researcher at Peking University, coined the term “ant-tribe” in order to draw a comparison between the lives of these college students and ants: “They share every similarity with ants. They live in colonies in cramped areas. They're intelligent and hardworking, yet anonymous and underpaid."

Though they may live in similar conditions, the ant-tribe’s upward-mobility factor sets them apart from migrant workers. Whereas the migrant workers wants little more than to send money back home and return to be with families for Chinese New Year, the ant-tribe is here in the city to stay. They see their current condition as a necessary step for a relative newcomer to establish long-term roots in a big city.

To save on rent, the “ants” often find themselves living in a less-than-desirable place with one or more of the following attributes:

A typical day for an “ant” consists of getting up at 5am to prepare for a two-hour commute on crowded public transportation. Their survival jobs may differ week by week, ranging from passing fliers on the street corner, delivering fast food, or if they are lucky, grinding their way through a grueling trial period at an entry-level position in their field. In short, the “ants” face high pressure to find success in the city in order to justify their decision to stay.

WHAT MOTIVATES THE ‘ANTS’ TO STAY?

Although the ant-tribe’s conditions may sound grim, the “ants” remain optimistic. After all, big cities offer much to young people in terms of glamour, entertainment, and most importantly, career prospects. Being able to find success in the big city is a source of pride for the “ants” and for their families back home.

Many “ants” end up finding jobs in their chosen field, proudly climbing up the first rung of their career ladders. Perhaps many will even go on to become homeowners in the cities that they labored to dig their roots in, transforming into a member of the “mortgage slave” (房奴 fáng nú) tribe, yet another ubiquitous socio-cultural phenomenon in urban China.

We hope the hardworking “ants” will find luck, success, and even love in their time in the big city. Effort and perseverance shall pave the way to success!