A “Guy Tai” is man who has followed their wife to China, where she has a new job or employment prospect. It is known in some other countries as a “trailing spouse.” A Guy Tai may not have a job of his own, and are often stay-at-home dads. This is a relatively new term that has been popularized in the last few years.

In Chinese, we have a few different words for spouse.

“太太(tài tài)” = “wife,” often refers to “Mrs.” as well. This term vaguely suggests that the person is a housewife.

The younger generation in China is notorious for coming up with slang terms to describe certain stereotypes or demographics. You may have already heard of the term “剩女 (shèng nǚ),” or “Leftover Woman,” describing an older, successful woman who is single because men may be intimidated by her.

The “Guy Tai” term was first circulated in expat communities. At first glance, you might think this has to do with the “Mai Tai” drink. This is incorrect. The “Tai” part of the word comes from the Chinese term for housewife, “太太 (tài tài).” It is a cross-language reference to a stay-at-home husband.

Major metropolitan cities in China, including Shanghai, have seen an recent increase in “Guy Tais.” Why is that?

For one, the demand for luxury brands has also increased dramatically in China, and these corporations employ more women in executive positions than other companies. Therefore many women may receive job opportunities or job relocations to China. The economic recession also hit many countries hard, which makes it more likely for a husband to follow his wife to a country where she might have a more desirable employment prospect.

Being a Guy Tai doesn’t necessarily mean that they will take over all the traditional homemaker duties. Many households in China employ an “ayi,” which is a housekeeper does cleaning, cooking, and occasionally takes over the role of a nanny as well. Thus many Guy Tais will take the opportunity to rediscover long-lost hobbies, or study Chinese and Chinese culture, or spend their days being a social butterfly in new circles. Not all Guy Tais are unemployed – some of them do freelance work or part-time work. Some volunteer.

There are some stereotypical traits associated with a Guy Tai. Almost all of them are foreigners that have had very limited exposure to Chinese culture before arriving. According to CNTV, the Guy Tai signature activity is touring factories such as the General Motors factory. Another common activity is visiting breweries.

There are now so many of them that organizations specific to Guy Tais are forming across the country. One such organization, Guytai.net, boasts over 100 members in Shanghai alone. This group helps coordinate activities and form friendships among these expat-husbands. 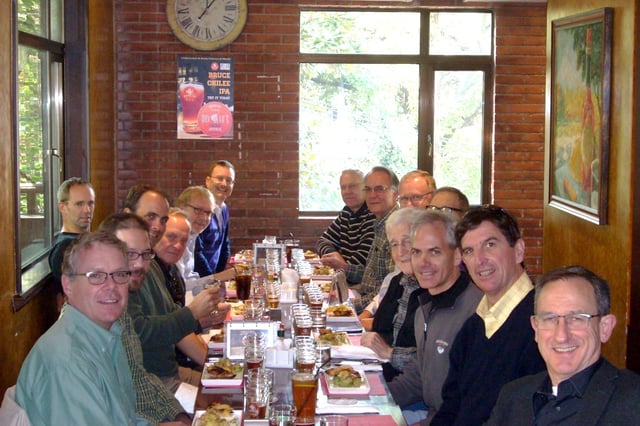 If you happen to meet a Guy Tai, be careful when using this term. Some men find it derogatory or insulting. After all, in a society where men are traditionally favored (despite what Chinese etymology may say about women) role-reversal is a difficult thing to swallow.

At the core of it, there is nothing wrong with being a Guy Tai. Living in a foreign country gives you lots of opportunity to explore and discover new customs! Obviously, a key component of culture is language. So if you’re a Guy Tai (or even if you’re not) you should considering taking a Chinese class with TutorABC Chinese.