Was The Great Wall of China Actually Effective?

The Great Wall of China is a historic landmark, one that every traveler should add to their bucket list. It made our list of “8 Places in China That Will Take Your Breath Away” and continues to be popular tourist destination, especially in Beijing. With border walls being a hot topic of discussion in today's political climate, we decided to take a closer look at the effectiveness of the Great Wall.

Did the Great Wall actually succeed in keeping enemies outside China’s borders? The short answer: yes, the Great Wall was successful in keeping semi-nomadic invaders out, which was the primary concern at the time. However, the wall did not stop some large scale invasions, and even the nomadic people were able to breach the wall from time to time.

What Was The Great Wall’s Purpose?

Construction began on parts of the wall as early as 7th BC, but it was Qin Shi Huang, the first emperor, who connected these parts and created what resembled a wall in 221 – 206 BC. It was more like a line of guard posts that helped spread signals to warn of invasions and draw in reinforcement troops.

The purpose of the wall was to protect against members of the XiongNu (also sometimes referred to as the “Huns”, a nomadic people in Ancient Central Asia) who often raided the Chinese northern border.

The XiongNu were highly mobile herders, who rode on horseback, and at the time were very adept at stealing from their neighbors of Northern China. While the wall was probably ineffective against individual armies (who could scale the side of it), the wall was much better at keeping horsemen and their horses out. Instead of having an open prairie as their battleground, the nomadic army was forced to concentrate their attack at one section of the wall. A smoke or fire signal would be lit along the wall, and reinforcement troops would be sent in.

Of course, not all horseback invasions were stopped, and there have been instances of nomadic people breaching the wall. However, one could argue that without the wall, China would’ve been invaded far more times if the wall hadn’t been there.

Trade on the Wall

If you thought scaling the wall with a horse was hard, imagine trying to get a cart full of supplies up the side of it to trade with China. Traders and businessmen from the north would have to find a gate along the wall, which made it easier to impose tax and duties, and regulate goods especially those brought along the Silk Road.

Since the wall often went over rough and barren terrain, it became a great mode of transportation for supplies.

Very little of The Great Wall from Emperor Qin’s time lasted, and much of the wall that is visible today is from the Ming Dynasty. During this time, Chinese culture flourished, and the dynasty reinforced parts of the Great Wall to protect against invasions. The Ming dynasty took a defensive stance militarily, and the wall assisted with that. One of the most famous parts is SiMaTai, which was built to “not let a single horse in (匹馬不入).” A section of the wall known as the “Heavenly Ladder” for being almost vertical up a cliff. 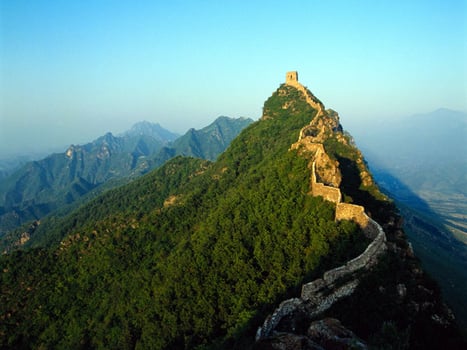 Perhaps the most famous instance of the Great Wall “failing” is when the Manchus, quite literally, marched through the Shanhai Pass. This led to the fall of the Ming Dynasty. However, some historians argued that The Great Wall was never truly tested – the Manchu invasion was facilitated by a Ming General, who decided to switch sides and let the army in.

Yes, the wall was quite successful to a certain extent, but it was also largely romanticized by Chinese and Westerners alike. A popular myth is that it is so large, it can be seen from the moon. In ancient Chinese folklore, even a woman’s tears were enough to collapse the wall. And a whole Hollywood movie was made about the Wall as a fortress from aliens, (starring Matt Damon.)

It helped keep nomadic forces at bay, and also served as good lookout points for invasions. But in the end The Great Wall was more of a moderate deterrent than an impenetrable fortress.