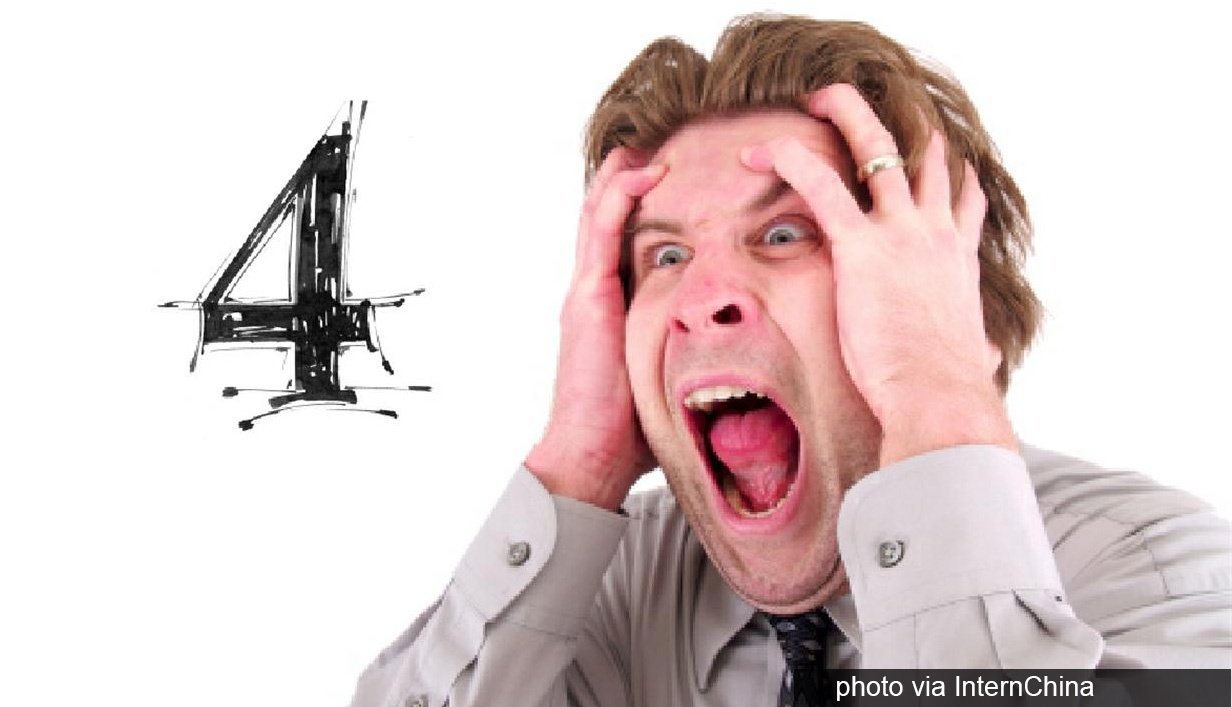 No. 4 is well known to be an unlucky number because 四 sounds similar to 死 (sǐ), which means "death" in Chinese. Did you know that if you press a Chinese elevator button to go to the 50th floor of a building, you may actually only be going to the 35th floor? This is because many buildings in China not only omit the 13th floor, but are also missing any floor containing the number 4, which is considered to be the unluckiest number in Chinese culture. The Chinese have many superstitions about numbers, often related to similar-sounding words in the Chinese language, which are called homophones.

In fact, the Chinese are so superstitious about numbers, that they will often spend big money for "lucky numbers" in their life. A man in Hangzhou listed his license plate, A8888, for $140,000 online. (Eight is a particularly auspicious number in Chinese culture.) Not only is that the case, but Chinese people will specifically avoid unlucky numbers during big holidays, such as Chinese New Year, or before a big exam like the SAT or Gaokao.

Here's a list of lucky and unlucky Chinese numbers!

The Chinese believe that doubles bring blessings. Many decorations for celebrations come in pairs, and gifts are also given in even numbers. For Chinese New Year, banners are placed symmetrically on both sides of the door. For traditional Chinese weddings, decorations often include the word 囍 (shuāng xǐ), which is a combination of two of the word 喜 (xǐ) , meaning “happiness”. Businesses will also repeat words in names and slogans, hoping to bring good luck.

三 sounds similar to 生, which means “life” or “to give birth” in Chinese. Chinese culture puts emphasis on family and strong, healthy children, so 生 has a positive connotation. In Buddhism, which is widely practiced in China, 3 is a significant number because it relates to the "three jewels", a foundational ideal.

4 is well known to be an unlucky number because 四 sounds similar to 死 (sǐ), which means "death" in Chinese. People will go to extremes based on superstitions of the number 4. In China, the presence of the number 4 is avoided in most public settings; in addition to elevator buttons, addresses, ID numbers, phone numbers, license plates, and product names will usually omit the number 4 for fear of being attached to bad luck. Houses and apartments that have 4 in the address number will sell for much less than ones without. Mentioning the number four to an ill family member is considered to be highly offensive, and giving anything with 4 on it to someone can be seen as a death threat.

The number 5 is associated with both good luck and bad luck depending on context. Since 五 sounds similar to 无 (wú), which means “not” or “without” in Chinese, it can be viewed as bad luck. However, the number is also associated with positivity because many Chinese traditional philosophical concepts revolve around the number 5, such as the five elements 五行 (wǔ xíng), which is used in traditional Chinese medicine, feng shui, martial arts, and even music.

The number 6 is generally considered to be lucky in China because 六 sounds like 流 (liú), which means "flow" in Chinese. Many businesses display the number 6 to bring good fortune. Unlike in western culture where 666 is associated with the devil, multiples of 6 is good in Chinese culture. A popular Chinese idiom, 六六大顺 (liù liù dà shùn), means that things will go smoothly.

Like 5, 7 has both positive and negative connotations in Chinese culture. For the positive side, 七 sounds like both 起 (qǐ), which means “start” or “rise”, and also 气 (qì), which means “vital energy”. Seven is also seen as a lucky number for relationships. The Qixi Festival (七夕節), also known as the Chinese Valentine's Day, falls on the 7th day of the 7th month in the lunar calendar. The 7th month is also known as the “ghost month” in China, where ghosts and spirits are believed to rise from hell to visit earth. While ghosts may be seen as omens, the ghost festival in the 7th month is widely celebrated. 7 may also be considered unlucky because 七 sounds like 欺 , meaning “cheat”.

8 is the luckiest number in Chinese culture because 八 sounds like 發 (fa), which means “wealth”, “fortune”, and “prosper” in Chinese. Multiples of eight are even better, as 88 bears a resemblance to 囍 (shuāng xǐ), or “double happiness”. While the Chinese will go to great lengths to avoid 4 in daily life, they will try to incorporate 8 wherever they can. In the Beijing summer Olympics, the opening ceremony began at 8:08 pm on 8/8/08. Since the number 8 is believed to bring good luck, many airlines in Chinese-speaking countries will use combinations of 8 as flight numbers.

九 sounds just like 久 (jiǔ), which means “long lasting” and “eternity” in Chinese. At birthday and wedding celebrations, the number 9 is welcome as it represents longevity. 9 was also traditionally associated with the Chinese emperor. The emperor's robes had nine dragons on them, officials were organized in nine ranks, and the Forbidden City is known to have a total of 9,999 and a half rooms.

The Chinese also use numbers with homophones for internet slang. Strings of numbers are used to represent different phrases:

520 (wǔ èr líng) - 520 is used for 我爱你 (wǒ ài nǐ), which means " I love you" in Chinese. Sometimes Chinese people prefer texting this to each other as opposed to saying the phrase, "I love you."

What do you think? Would you ever buy a license plate just for the lucky numbers? Do you avoid unlucky numbers? Let us know in the comments! 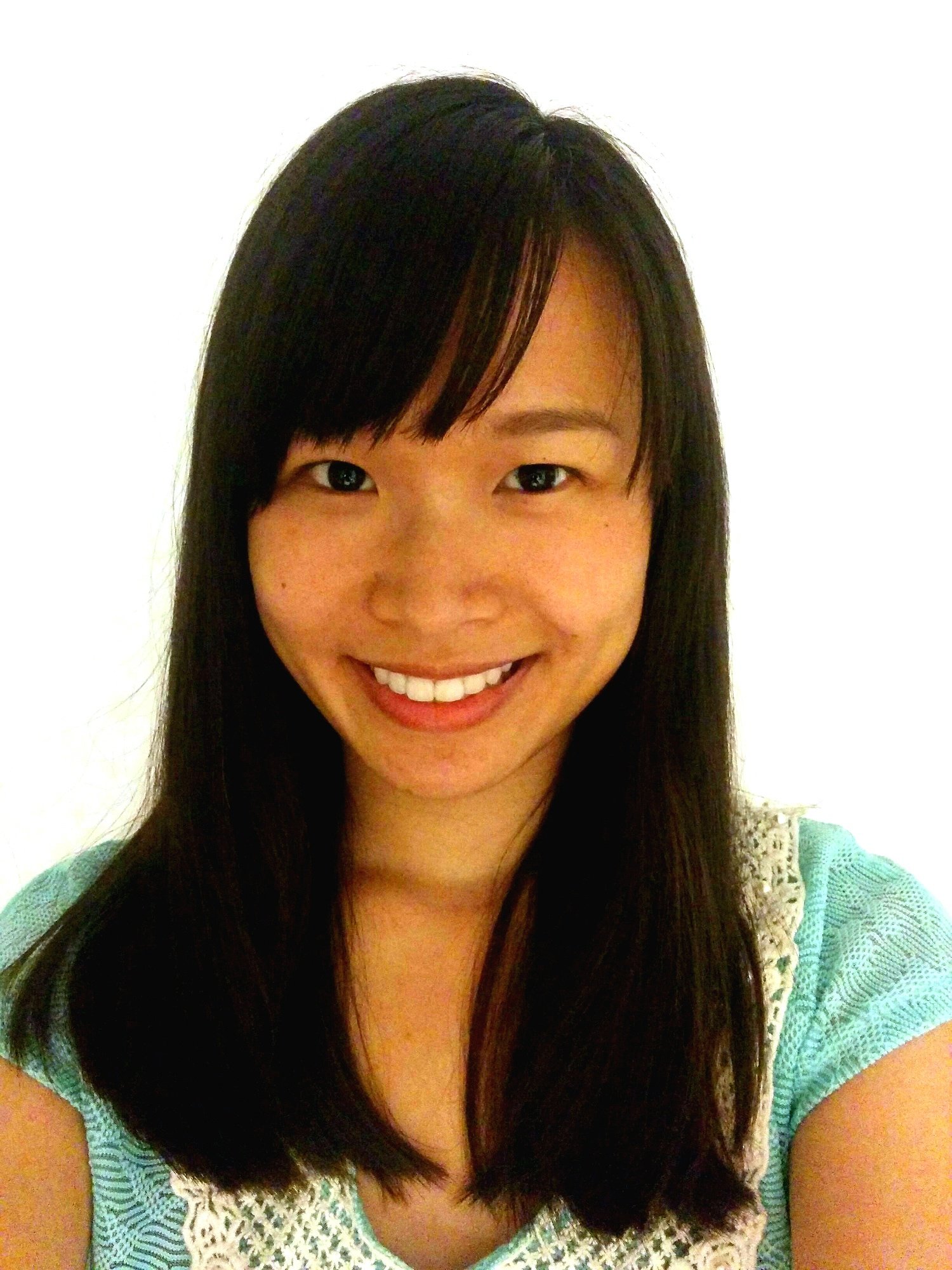 Judith Syau is a contributing writer at TutorABC Chinese. She is fully fluent in Mandarin Chinese, and has always been fascinated with exploring her Taiwanese heritage. She decided to go to University of California, Berkeley to get her degrees in Computer Science and Electrical Engineering. Her other interests include reading, sewing, and educational outreach.