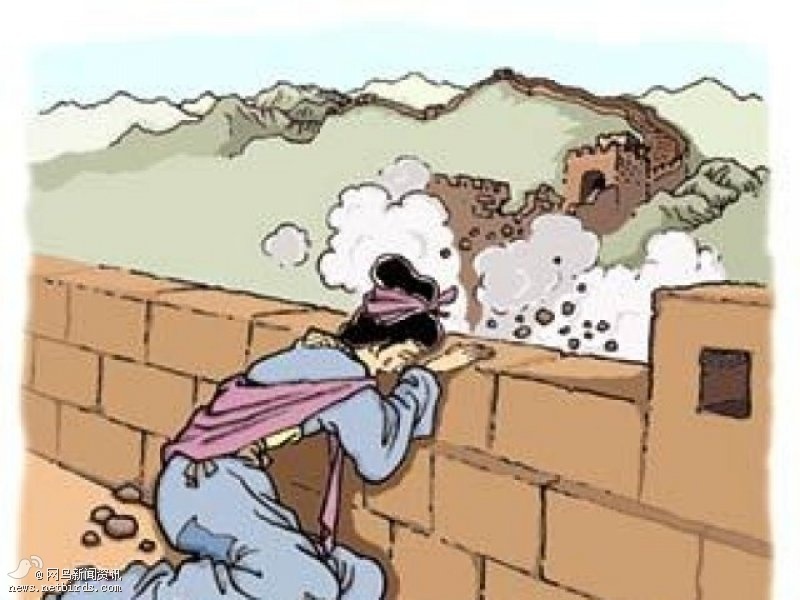 Lady Meng Jiang (孟姜女; Mèngjiāngnǚ)  is a famous Chinese folktale about a woman whose husband is forced to work on the construction of the Great Wall of China. It is one of the “Four Great Chinese Folktales”, the other three being The Butterfly Lovers, Legend of the White Snake, and theCowherd and Weaving Maid.

The story Lady Meng Jiang is sometimes also known as "孟姜女哭长城 (mèng jiāng nǚ kū cháng chéng)" which translates into "Lady Meng Jiang Weeps Down The Great Wall." This not your simple romantic tragedy; its a folktale that undertakes heavier topics such as grief and citizen identity. Strife between the government and its people is a recurring theme throughout history, and such views often bleed and trickle down through time and era.

Many editions of this story exist, but it became especially popular after the Great Wall of China (长城; Chángchéng) was built. While different versions present multifaceted plotlines, this tale has a general message that deeply resonated with those that found their emperor as a perpetrator of injustice.

Lady Meng Jiang and her husband were recently married and were planning on enjoying their time as newlyweds. However, as the Great Wall was in construction, able-bodied men were frequently sought out by soldiers under the order of Emperor Qin (秦始皇; Qínshǐhuáng). Said soldiers came and snatched Lady Meng Jiang’s husband away just days after the wedding.

Weeks turned into months, and day after day she thought of her husband. One winter night, Lady Meng Jiang had a nightmare about him, dreaming about his voice calling out to her about how cold he was. In the nightmare she noticed that he also had thin clothing, so after waking she took it upon herself to meet her husband and bring him clothes. Upon reaching the Great Wall she could not locate her husband, and soon she discovered from others that he had already passed away. Stricken with grief, she cried against the wall. Her grief was so strong that she caused the wall to collapse, revealing the bones of her husband. Lady Meng Jiang, still deeply in love with her deceased husband, decided to jump in the sea. 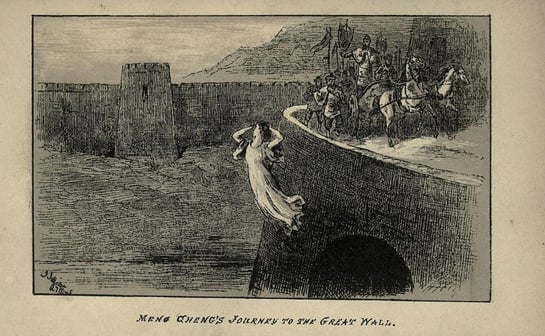 The basic plotline was established in《左传》 (Zuǒ chuán; Zuo Traditions/), a historical narrative that provides commentary about the 春秋 (Chūnqiū; Spring and Autumn Annuals) chronicle. Our protagonist had no name, as common practice dictated, but her husband was named 杞梁 (Qǐ liáng). The narrative commended how she was able to maintain a clear mind and strong will through rough times, as her husband passed away in battle.

The first time where her cries could destroyed walls came from a rendition by 刘向 (Liú Xiàng) during the Western Han Dynasty (西汉; Xīhàn). He detailed that the couple neither conceived a child during their union nor had family to support them, and thus after her husband’s death the lady was left with no family. The lady thus mourned at the site which her husband was buried at for days, moving the hearts of every traveler that passed by. Eventually, the city that surrounded them ended up collapsing due to her cries.

Our story took on multiple edits and became the tale we know today during the Tang Dynasty (唐朝; Táng cháo), where our Lady was finally given a name and story revamped to highlight how injustice is appointed upon citizens. 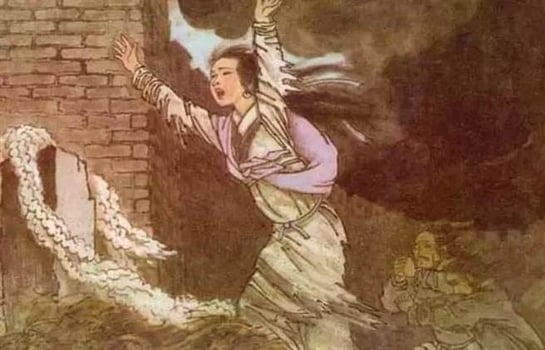 As with any historical tale, different variations of the narrative exist:

The Great Wall of China: Although known under a collective label, the fortifications that were built along the historical northern border of the Chinese States were constructed over a period of time. They were built to provide a line of defense against nomadic invaders and its first stones were erected ages before Emperor Qin came into power. Although his contribution is what’s passed down through time, most of what remains standing is actually left from the Ming Dynasty (明朝; Míng cháo), long after Emperor Qin’s rule.

Emperor Qin: Often labeled as the most ruthless ruler of Chinese history, Emperor Qin (or more formally known as Qin Shi Huang) conquered and united the Warring States into “China” in 221 BC. He standardized many aspects of Chinese culture, such as politics, economics, language, and public transportation, but did so through extreme measures. He is often noted as the one that led troops to burn books and execute scholars. In many famous Chinese works, Emperor Qin is portrayed as the wicked villain.

What do you think of this folktale? Let us know in the comments!

Angela Fang is a contributing writer at TutorMing. Born in New Jersey, she decided to go to University of California, Berkeley, to get her degrees in Economics and Math. In her free time, she enjoys napping, surfing the Internet, and playing the violin. Corgis are her spirit animal.