Chinese Thanksgiving: Mid Autumn Festival- The Legend and The Traditions

Mid-Autumn Festival, or Moon Festival 中秋节 (Zhōng Qiū Jié) as it’s known in China, is the 15th day of the 8th month in the lunar calendar. This puts it in September or October on the solar calendar.

Mid-Autumn Festival is considered a harvest festival, and some people even compare it to Thanksgiving in American culture.

This is a time for families to hold reunions, and many Chinese people travel back to their hometowns. The moon is the fullest on this day, and the circle shape signifies "reunion" in Chinese culture. Reunion is "团圆 (tuán yuán)" and "圆 (yuán)“ means "round."

Every Chinese holiday has a story behind it (even if it's slightly creepy like an act of cannibalism) and Mid-Autumn Festival happens to have one of the most iconic ones.

Traditionally, this is a day where the Chinese people worship and celebrate the moon. There are several versions of the legend Chang ‘E, which tells of the moon goddess. Below is one of the versions:

A strange phenomenon occurred one day — 10 suns arose in the sky instead of one, blazing the earth. Houyi, an expert archer, stepped forward to try to save the earth. He successfully shot down nine of the suns, becoming an instant hero. He eventually became king and married a beautiful maiden named Chang’e.

But Houyi grew to become a greedy and tyrannical ruler. He sought immortality by ordering an elixir be created to prolong his life. The elixir in the form of a single pill was almost ready when Chang’e came upon it. She purposely swallowed the pill so he would not be immortal and cause pain for the people forever. This angered King Houyi, who went after his wife. Trying to flee, she jumped out the window of a chamber at the top of the palace—and, instead of falling, she floated into the sky toward the Moon.

Chang'e has lived on the moon ever since, with a giant jade rabbit as her companion. You can see the shape of a rabbit underneath a cinnamon tree in the shadows of the moon.

The story of Chang'e is such a huge part of Chinese culture, that the last three lunar orbiters from Beijing were named Chang'e I, Chang'e II, and Chang'e III respectively. China's lunar rover was named 玉兔 (yù tù), "Jade Rabbit." 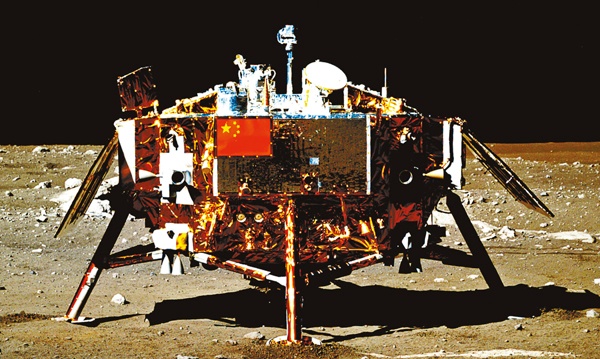 Mid-Autumn festival is also the appropriate time to eat mooncakes, a Chinese dessert. This New York Times article estimates that mooncakes are a 2 billion dollar a year industry.

What is a "Mooncake"?

Mooncake is a traditional food Chinese have on Mid Autumn Festival. It often has a salted egg yolk in the middle to symbolize the full moon. To many people, it definitely has an acquired taste. It is sweet and salty, gluttonous pastry filled with a dense filling such as lotus seed paste or a red bean paste.

Nowadays, contemporary mooncakes are popular for those who do not enjoy the traditional taste. Even global chains such as the coffee giant, Starbucks, and the german ice cream brand, Haagen Dazs, have released their own version of mooncake. Haagen Dazs mooncakes are actually made with ice cream. T

Related: What Is Mooncake - Detailed Explanation

Related: 7 Non-Traditional Mooncakes That Are Out Of This World

Even if you can’t enjoy some mooncake with your loved ones, you can at least go outside and gaze upon the full moon. Maybe you’ll spot the moon goddess.