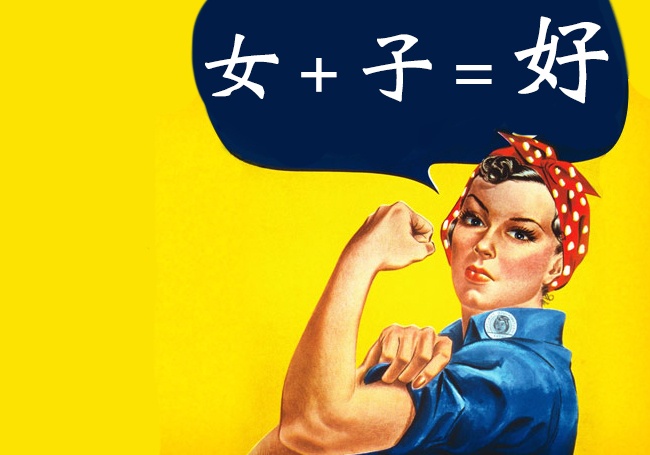 Chinese characters were created some 5,000 years ago, and during that timespan it was sufficient to say that women and men did not have equal rights. The Chinese value balance, as in balancing forces. The Yin and Yang concept is deeply rooted in Chinese philosophy, where two opposing forces must coexist to make harmony in the world. Because of this, the Yin component is “negative, passive, and female” whereas the Yang component is “positive, active, and male.” So it appears that women got the short end of the stick when it came to this philosophy. As we mentioned in our post about Chinese names and gender, women tend to get stuck with characters that mean "pretty" or "safe" or "flower" in their names.

With that being said, women have always been considered to have great importance in Chinese culture, and this is reflected in certain aspects of the language as well. As Mao Zedong famously said, “Women hold up half the sky.”

As we examine the following characters, it is interesting to note that while there is an obvious radical for “female”: “女,” there is not one that clearly denotes “male.” The closest is “亻” for “man,” but that refers to man as in “human,” not as in “male.”

Without further ado, let's look at our list of female-empowering characters.

This character has the radical for “female” and the character for “life”: “生.” According to ancient Chinese scripts, the original meaning was “where you were born into,” explaining the presence of the female radical.

Example sentence: “你的姓名是什么?”
Meaning: “What is your [full] name?”

Older meanings of this word were used to describe beauty and perfection. The ancient pictograph displays a woman holding a child. The meaning of the word derived from the feeling of perfection and fulfillment that comes from a mother being with her child. Note that there is no mention of "male" anywhere.

In 2000 BC, many parts of China were actually matriarchal societies, where the women had more power. Because of this, the oldest Chinese surnames “姜 (jiāng)” along with surnames “姬 (jī)” and “媙 (wēi)” have the female radical in them. Even in modern China, people bearing some of the oldest surnames have a certain amount of respect just because they came from such an ancient bloodline.

It also means ginger, a spice that is ubiquitous in Chinese cuisine.

This Chinese character is commonly used in phrases like “威力” or “power.” The female radical “女” is tucked in the bottom of this character. According to China’s 《说文》(think of it as an ancient version of Wikipedia), this character was actually originally used to represent the “mother-in-law,” or the husband’s mother.

Example sentence: “这个鞭炮威力十分惊人，一定要小心!”
Meaning: “This firecracker has astonishing power, you must be careful!”

While this word refers to form, making one think it would be specific to the female form, it was also used to represent “风度” which represents one’s bearing or demeanor. It also referred to artistry and talent. One of the earliest appearances of this character was in the phrase “雄姿 (xióng zī),” meaning “majestic,” and used to describe warriors at battle. “雄” is used to mean “heroic” is often found in male Chinese names.

The ancient pictograph of this character depicts a claw “爪” and a female “女.” This means that once one is able to wed a female, all is safe and steady in his life. Nowadays, “妥” is rarely seen on its own, and is often used in phrases such as “妥当 (tuǒ dàng)” which means “appropriate,” or “妥协 (tuǒ xié)” which means “compromise.”

Example sentence: “这件事应该妥当处理.”
Meaning: "This task should be handled appropriately."

What did you think of those characters? Did they surprise you? Let us know in the comments below.