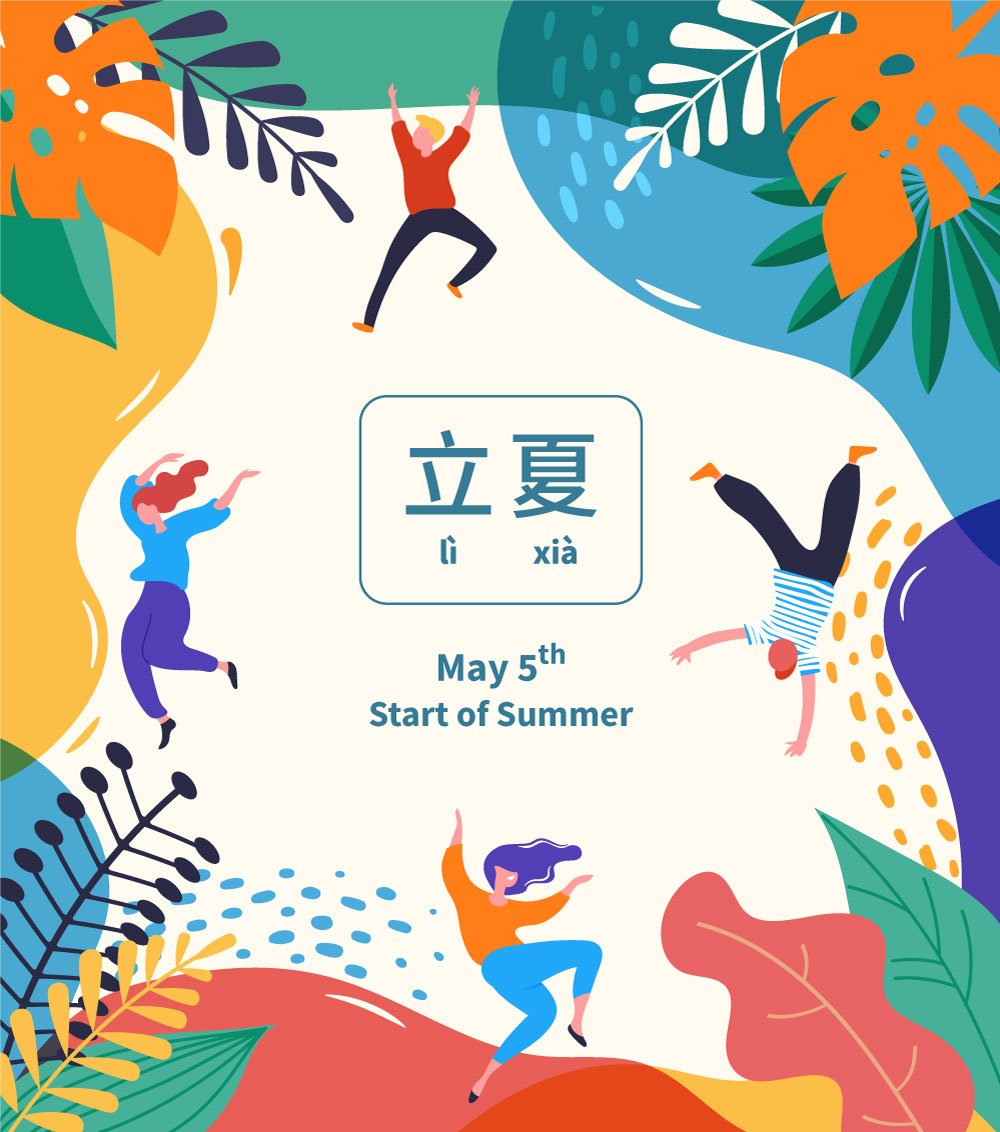 As summer heat is approaching, 立夏 Lì xià, the 7th solar term of the year, marks the beginning of summer. With significantly increased temperature and higher frequency of thunderstorms, 立夏 provides a perfect condition for cultivation and is considered to be the crucial growing season for crops.

In ancient China, emperor would hold a grand welcoming ceremony to pray for a rich harvest of the year, in the meantime, lead his officials to suburban area and encourage his residents to grab the key time to do the farm works on the day. The ceremony is now rarely observed in China, but the folk customs such as eating five-color rice, 五色饭 Wǔ sè fàn, eating eggs, 吃蛋Chī dàn, and weighing people, 秤人 Chèng rén, have remained quite common across the country.

五色饭 Wǔ sè fàn, five-color rice, is also called 立夏饭 Lì xià fàn, and it’s usually made with 5 different colors of beans, including red beans, soybeans, black beans, green beans, and peas. Mix these beans with rice and steam together, and a seasonal 立夏饭 is ready to serve. In modern times, the recipe could be a little different. People can actually pick 5 favorite ingredients, better with different colors, and mix them with steamed rice to make your own 五色饭. The meaning of eating five-color rice is to reach a balance of the Five Elements and to maintain an inner equilibrium of your body.

The custom of 立夏吃蛋 Lì xià chī dàn, eating eggs on Start of Summer, has been practiced for thousands of years. There was an old Chinese saying that “立夏吃了蛋，熱天不疰夏” Lì xià chī le dàn, rè tiān bù zhù xià which means if you have eaten eggs on 立夏, hot weather is not going to cause you summer fever. In ancient times, foods and supplies are not as sufficient as we have today, therefore; ancient people believe that egg is an ideal food, full of essential nutrients, provides well-rounded nutrition to our body and could also bring you back to a good health condition quickly from illness. The chronic summer fever, called 疰夏 Zhù xià, is quite common during hot summer day, especially on children at young age. People who have this summer fever will be easily feeling fatigued, loss of appetite, and result in a rapid loss in body weight, and that’s probably the reason why people have custom of calculating people’s weight on the day of 立夏.

The custom 秤人 Chèng rén, weighing people, could be traced back to Three Kingdoms Period, and it’s still thriving in southern China today. The main purpose of calculating people’s weight is to make sure that the person’s health condition is in a good shape, and it’s also the time to check how much weight a young kid has gained in the past year as weight gained was the main health indicator in ancient China.

According to Traditional Chinese Medicine (TCM), summer is a Yang season associated with the element Fire and links to the organ system of heart and small intestine. During summer time, Yang energy, 阳气 Yáng qì, is quite active, so the dietary plan should focus more on Yin foods, wet and cool, to help you ease the summer heat and fire within your body. Fruits and vegetables are always recommended, especially during summer.

TCM also suggested that red foods such as red beans, tomatoes, peach, watermelon, and carrots help nourish the heart. Bitter foods such as coffee, bitter melon, sow thistle, arugula, and kale, are also good choices during this season since they help cool down the heat and fire accumulated in your body.

Taking these suggestions while preparing for your daily meals during 立夏, and don't forget to include a few of red or bitter foods in your diet to provide a good support with balanced Yin and Yang energy in your body.