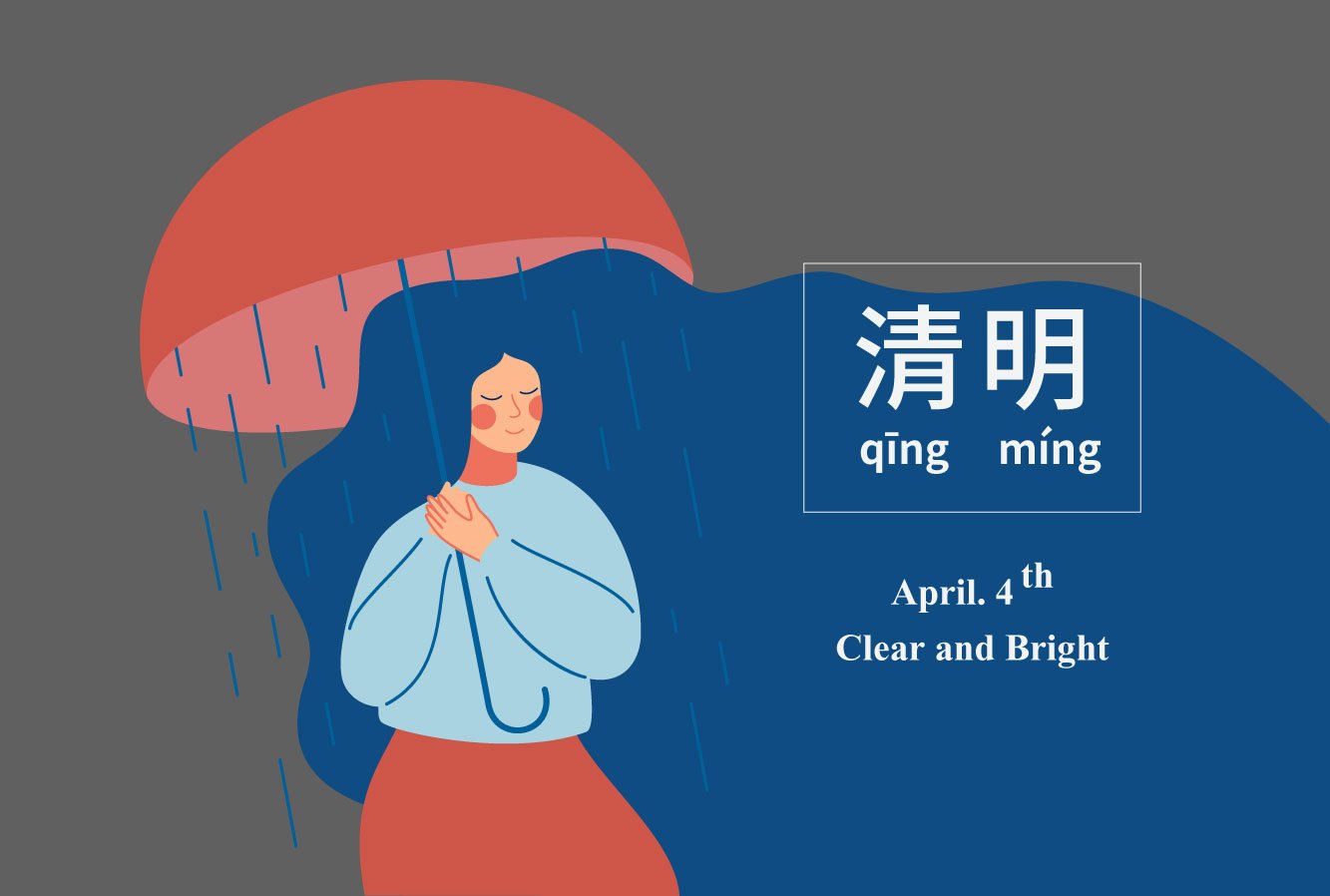 清明, Clear and Bright, is the fifth solar term of the year, and its name just perfectly describes the weather during this period as increasing rainfall along with the rising temperature makes everything become clear and bright.

扫墓 Sǎo mù is the tradition on the day of 清明 as it is one of the most important traditional Chinese festival, 清明节 Qīngmíng jié, Qingming Festival, as known as Tomb-Sweeping Day. The tradition of 清明扫墓 Qīng míng sǎo mù has been observed in China for thousands of years. It’s the time for family to reunite and express gratitude to their ancestors and to commemorate their family members who have passed away.

Family members usually get together in the early morning of the day and visit the gravesite to clean up the weeds around the site. They will also bring offerings, such as incense stick (香Xiāng), joss paper (紙錢 Zhǐ qián), fresh flowers (鲜花Xiān huā) , fruits (水果Shuǐ guǒ), and favorite dishes (最喜欢的菜 Zuì xǐhuān de cài ) that the departed have enjoyed the most in life.

The contemporary joss paper (纸扎 Zhǐ zhā ) has offered a great variety of choices, including paper currency, house, cars, and even joss paper servants. People would provide all the good things to the departed and make sure they have no worries of any deficiencies in their afterlife.

Meanwhile, lilies or chrysanthemums would be the most appropriate choices of flower.

After the gravesite has been cleaned, the ritual begins. Family members would start to put the offerings on the tomb, praying to ancestors, placing incense stick, and burning joss paper. Once the ritual is complete, leave the site quietly and go directly to noisy and crowded places, such as shopping mall or markets to avoid any bad spirits following you back home.

Traditional dishes during 清明 are 润饼 Rùn bǐng and 青团 Qīng tuán ( or 草仔粿 Cǎo zǐ guǒ in Southern Fujian ). 润饼 is kind of spring roll but the stuffing is usually cooked while it is uncooked in spring roll. 青团 is made with sticky rice and come with both sweet and salty flavors. Stuffed sticky rice ball with either red bean paste or with stir-fried ground pork and shred radish. Both 润饼 and 青团 are usually served in cold as it is the tradition driven from 寒食节 Hán shí jié, Cold Food Festival. 润饼 and 青团 are commonly used as the traditional offerings during 清明節, and it’s also a popular dessert to the living, especially in southern China.

As the rainfall has been increasing since last solar term, Traditional Chinese Medicine (TCM) suggested adding ginger, red beans, or black beans into your meal to eliminate the extra dampness of your body. Meanwhile, moderate outdoor exercise is always good to your body, especially during this period of time. Taking a short walk in a park, go hiking in a beautiful trail, or practice Tai-Chi at your backyard would be benefit to flourish 阳气 Yáng qì, the Yang energy, in your body.