13 Very Surprising Things I Discovered When First Coming to China 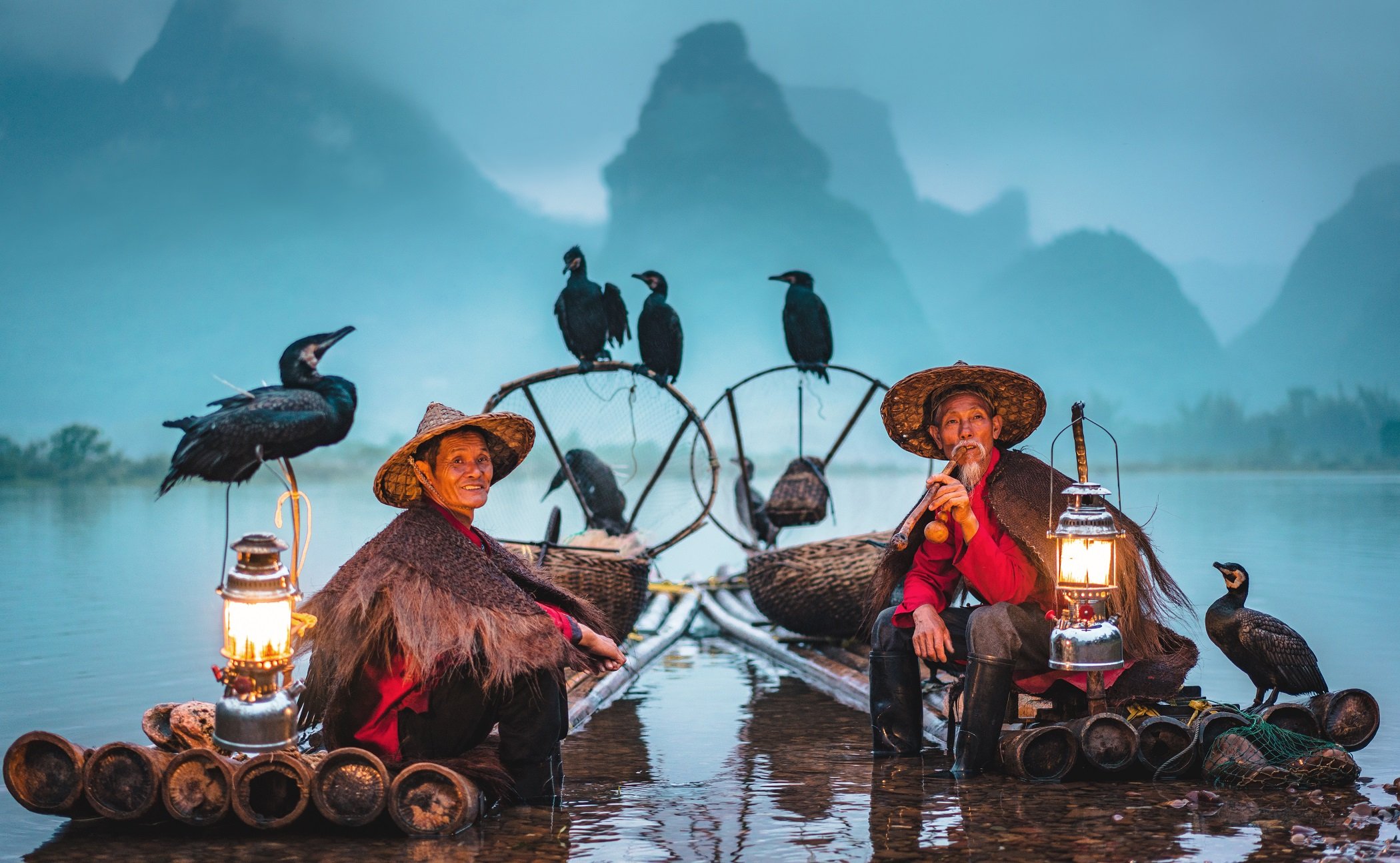 I was extremely excited the first time I flew to China, even though I somehow didn’t know what to expect once arriving there. My French university sent me to Chongqing for one year, giving me the chance to realize my dream and discover the country I’ve always wanted to live in.

When getting out of Chongqing airport, I quickly made new local friends and decided to follow them blindly to start taking my first steps in the real, authentic, and astonishing Chinese lifestyle. Below is the list of the 13 things that amazed and really surprised me the first time I came here.

1. The Beijing Bra (Or should I say the “Chongqing bra”?) Well, actually this phenomenon happens in a lot of cities all over China. The Beijing bra defines a stylish way to fight the heat during summer where Chinese men roll up their shirt, exposing their bellies to cool off while still wearing their shirts.

In the past, some Chinese men used to walk shirtless in the streets when the weather was too hot, but during the 2008 Beijing Olympics, authorities started to reinforce their policy where locals should wear shirts in public. Thus, men who were not used to having a shirt on outside when the temperature reaches more than 35 degrees, started to roll their shirt halfway up their body to let it breathe. Squat toilets represent the majority of toilets in western China. Since I was living in Chongqing, I had no choice but to use them. Whether it was in my apartment, my friends’ home or in public toilets, almost all the ones I used for one year when living in Chongqing were squatting toilets.

My feet and legs were sore for the entire first month. I was always complaining about it. But surprisingly after a few months, I got used to it and even started to like it more than western toilets.

There are even some studies showing that squat toilets are better for the body (since humans are supposed to squat when taking a number two) and more hygienic since your bottom and legs don’t touch anything.

While it is strictly forbidden in shopping malls and other fancy places, you can still find a lot of small local restaurants where it is allowed to smoke cigarettes. Most of the non-smokers are not bothered by the smell of the cigarette.

If you go to a traditional hotpot restaurant, you may find a lot of local people drinking, smoking and enjoying the amazing taste of spicy hotpot.

As for bars, karaoke, and nightclubs, smoking is also allowed. If you have long hair, don’t forget to wash it after a night out party.

Chinese people usually don’t like to split the bill, and always fight when it is time to pay for it. If you never fight about this with them, they would think that you are probably stingy, so remember to involve yourself in the fight and be the one to pay for the bill.

When going out in a bar, Chinese people prefer paying for their drink round by round instead of ordering individually. When the bill is too expensive, one person will pay first, and the other can send him/her a red envelop 红包 hóngbāo with money directly on WeChat or Alipay. In my younger days, I used to take my time to drink and enjoy wine or cocktails, but that time has gone. Once being in China, I started to learn numerous drinking games, take shots in one gulp, grimace, and drink another one. Chinese young people love to play drinking games, whether it is with dice, tissues, cards, or their own hands. The favorite alcohol for young people is beer, while older people may prefer Baijiu.

Drinking games are not only a way to enjoy a night out with our friends, but also an opportunity to meet new ones. I met a lot of “friends of friends” when going out to bars or KTV, and the easiest way to break the ice and avoid some awkward and boring introduction conversation is to play drinking games.

My first day in China was also my first time to be hosted in a Chinese family home. They prepared a small bedroom just to welcome me, and it was when entering it that I discovered bamboo mats, and realized that I had to sleep on it.

A lot of Chinese people use bamboo mats that are made from bamboo pieces or thin reeds to cover their beds. They also use it to cover pillows, sofas, desk chairs, and even car seats. Since I was hosted by an authentic Chinese family, I had the chance to test the whole package.

Bamboo mats may sound not comfortable at all but sleeping on it actually feels awesome, especially during summer, because the cold bamboo mats caress and cool off your skin.

7. Going out with umbrellas during sunny days

I knew I would see some people using umbrellas during sunny days to protect themselves from UV rays, but I wasn’t expecting to see so many people doing it. Even though the majority of local people doing it are women, you can still see many men using it as well.

I thought the only reason they do that is to avoid getting tanned, but I realized after spending a whole week with 37 degrees outside that umbrellas actually protect you from having heat stroke.

8. Security checks in every metro station That was quite a surprise for me the first time I took the metro. All railways and subway stations are protected by high-security surveillance.

In train stations, hidden cameras are installed, security guards can be observed patrolling high-traffic areas and you must place your carry-on luggage into a metal detector machine, while you must walk through a metal detector screening and get a pat down from a guard. It not only ensures security but also makes travelers come a little bit earlier to the train station to avoid them rushing all at the same time before their train comes.

In metro stations, the security check is actually really fast. Every person with a handbag, backpack, or piece of luggage should put it on the conveyor belt to get it scanned. If you have a plastic bottle with you, give it to the security guard so he/she scans it as well. Going through this fast security checks allows security guards to ensure safety but most importantly to reduce crowd movement.

Open-crotch pants (开裆裤 kāidāngkù in Chinese), also known as open-crotch trousers or split pants, are worn by toddlers throughout mainland China. Often made of thick fabric, they are designed with either an unsewn seam over the buttocks and crotch or a hole over the central buttocks. Both allow children to urinate and defecate without the pants being lowered. The child simply squats or is held by the parent, eliminating the need for diapers.

While most Chinese people buy diapers for their baby, you can still find some people using open-crotch pants in the countryside. It teaches them how to squat at an early age and avoid the babies from feeling uncomfortable in their used diapers. Chinese people cook almost everything. To take a chicken for example, while most of the western countries would mostly cook the breast and legs, Chinese people cook it entirely. Thus, don’t be surprised to see chicken feet, chicken butt or chicken head when going to a restaurant.

Same for other animals, you can find a lot of places to eat pig’s ears, duck blood, etc. It may sound reluctant for westerners but it actually tastes really good.

On the picture above, you can see duck intestines and pig’s waist which my friends and I ordered in a famous hot pot restaurant. In my home country in France, most university students and teachers have a distant relationship. The only way to communicate with them outside of the classroom is through emails (but some of them won’t even reply to you). They may be very good teachers (or not), but there is little chance you actually create a good student-teacher relationship.

When I first arrived in China, I was pleasantly surprised that my teachers were more than just teachers. For my first class, teachers created a WeChat group so that everyone could communicate about homework or exams. My teachers answered any of our questions on WeChat anytime (and very quickly), but also encouraged us and gave us advice before any exams. My classmates, my teacher and I used to have lunch or dinner at least once a month, talking about our lives and had the chance to get to know more about each other.

For my graduation photo shooting (made with my classmates using our smartphones), my teacher drove an hour from her place to the university on a Sunday just to be with us. This is something I will definitely remember and be thankful for.

Square dancing (广场舞 guǎngchǎng wǔ in Chinese) is, in my opinion, one of the coolest things in China. When I was studying in Chongqing, I used to live in in the middle of a famous and lively square called Sanxia Square. Every day of the year, from summer to winter, I could find groups of people from all ages using their own music equipment to dance together and enjoy the end of the day. While young people enjoy hip-hop and other popular dances, older people waltz on traditional music.

I still don’t know if it is the worst or best thing ever. Traditional mattresses in China tend to be very thin (maximum 5cm thick). Laying on your bed watching videos on Tengxun Shipin (Chinese Netflix) on a super thin mattress is absolutely not comfortable. I have experienced it and it hurts.

However, the reason I still think it is the best thing is that I was sleeping like a baby and my body was not sore when I woke up.

I now live in Taipei and use now a “normal” mattress, but I really miss my old thin hard one.

I could go on and on, but I guess there are some things that you should discover by yourself if you haven’t been there yet.

What about sharing with us your comments? J

If you haven’t been to China, which of the above things intrigued you the most?

If you have been to China already, which other things did you experience which surprised you a lot?

Don’t hesitate to share your experience with our TutorABC Chinese community.

Also, if you want to try a free online Chinese demo class, click on the link below !